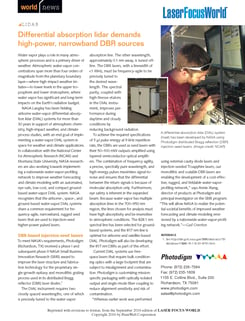 Water vapor plays a role in many atmospheric processes and is a primary driver of weather. Atmospheric water-vapor concentrations span more than four orders of magnitude from the planetary boundary layer—where high-impact weather initiates—to lower levels in the upper troposphere and lower stratosphere, where water vapor has significant and long-term impacts on the Earth’s radiation budget. NASA Langley has been fielding airborne water-vapor differential-absorption lidar (DIAL) systems for more than 30 years in support of atmospheric chemistry, high-impact weather, and climate process studies, with an end goal of implementing a water-vapor DIAL system in space for weather and climate applications. In collaboration with the National Center for Atmospheric Research (NCAR) and Montana State University, NASA researchers are also working towards implementing a nationwide water-vapor-profiling network to improve weather forecasting and climate modeling with an automated, eye-safe, low cost, and compact ground-based water vapor DIAL system. NASA recognizes that the airborne-, space-,and ground based water-vapor DIAL systems share a common requirement for frequency-agile, narrowband, rugged seed lasers that are used to injection- seed higher-power pulsed lasers. A differential absorption lidar (DIAL) system has been developed by NASA using Photodigm distributed Bragg reflection (DBR) injection-seed lasers.


This work describes the development and testing of a new instrument for in situ measurements of sulfur dioxide (SO2) on airborne platforms in the upper troposphere and lower stratosphere.  The instrument is based on the laser-induced fluorescence technique and uses the fifth of a tunable fiber amplified semiconductor diode laser system at 1084.5 nm to excite SO2 at 216.9 nm.  ...


Physiological monitoring of oxygen delivery to the brain has great significance for improving the management of patients at risk for brain injury. Diffuse correlation spectroscopy (DCS) is a rapidly growing optical technology able to non-invasively assess the blood flow index (BFi) at the bedside. The current limitations of DCS are the contamination introduced by extracerebral tissue and the need to know the tissue’s optical properties to correctly quantify the BFi. To overcome these limitations, we have developed a new technology for time-resolved diffuse correlation spectroscopy. By operating DCS in the time domain (TD-DCS), we are able to simultaneously acquire the temporal point-spread function to quantify tissue optical properties and the autocorrelation function to quantify the BFi. More importantly, by applying time-gated strategies to the DCS autocorrelation functions, we are able to differentiate between short and long photon paths through the tissue and determine the BFi for different depths. Here, we present the novel device and we report the first experiments in tissue-like phantoms and in rodents. The TD-DCS method opens many possibilities for improved non-invasive monitoring of oxygen delivery in humans.

We report on a simple, compact, and robust 780 nm distributed Bragg reflector laser with subkilohertz intrinsic linewidth. An external cavity with optical path length of 3.6 m, implemented with an optical fiber, reduces the laser frequency noise by several orders of magnitude. At frequencies above 100 kHz the frequency noise spectral density is reduced by over 33 dB, resulting in an intrinsic Lorentzian linewidth of 300 Hz. The remaining low-frequency noise is easily removed by stabilization to an external reference cavity. We further characterize the influence of feedback power and current variation on the intrinsic linewidth. The system is suitable for experiments requiring a tunable laser with narrow linewidth and low high-frequency noise, such as coherent optical communication, optical clocks, and cavity QED experiments.