The basic design considerations for a spectrally-stable DBR semiconductor laser specifically designed for pulsing in the nanosecond regime is presented, along with test results from devices fabricated according to these design parameters.  Results show excellent mode selection and spectral stability over an extremely large range of conditions, including temperature ranges of 15-60ºC and peak drive current ranges from threshold to 880 mA.  These lasers exhibit peak output powers of greater than 500 mW for DBR semiconductor lasers at 976 nm and 1064 nm while remaining spectrally stable.  Chirp data shows the chirp can be effectively tuned from approximately 1 GHz to greater than 20 GHz by varying the pulse width and peak drive current.

Lasers capable of producing spectrally-stable optical pulses in the nanosecond regime are desired for a variety of application including metrology, frequency doubling, and material processing.  Many of these applications demand extremely high peak power warranting the use of fiber amplifiers combined with seed lasers capable of producing spectrally-stable nanosecond pulses.  Other applications require the maximum amount of power possible from a single device for the most cost effective solution.  By properly designing a distributed Bragg reflector (DBR) semiconductor laser, a laser capable of lasing on a single-longitudinal mode can be fabricated that is also capable of several hundred milliwatts of peak power.  This paper describes the basic consideration in the design of such a DBR semiconductor laser, as well as results from DBR lasers fabricated to achieve high-power spectrally-stable optical pulses in the nanosecond regime.

In Section 2, the basic design consideration will be addressed.  In Section 3, the experimental setup used to measure the spectral behavior of the fabricated devices will be described. In Section 4, the measurement results will be presented for both 976 nm and 1064 nm DBR semiconductor lasers, followed by a summary of the results in Section 5.

The second key factor, the mode spacing, which is determined by the effective length of the laser cavity, must be chosen such that the laser has a very limited choice of longitudinal lasing modes.  The mode spacing, dl, is determined by the gain length of the cavity, La, the group refractive index in the active region, , the effective grating length, Leff, the group refractive index in the grating region, , and the wavelength, l, and is given by [2]

For determining the mode spacing, we can assume that the effective refractive indices in the two separate regions are approximately equal since these values will not be significantly different.  The effective grating length is the inverse of twice the coupling coefficient [2].  The adjustment of the mode spacing will depend on the adjustment of the gain length since all other parameters are effectively fixed for a given DBR grating and epitaxial laser structure.

Therefore, obtaining spectrally-stable optical pulses requires this balance of mode spacing and DBR reflection bandwidth to be maintained.  If high peak power is the goal, the laser cavity must be as long as possible.  The longer cavity will yield a higher gain length, a lower current density for a given output power, and a lower thermal resistance, all of which is necessary for high power operation.  Thus, the DBR will need to be fabricated with the narrowest reflection bandwidth possible while maintaining a high peak reflectivity to allow for the smallest mode spacing and longest cavity possible.  Thus, the DBR must be designed and fabricated such that the reflection bandwidth is sufficiently small and, consequently, the shape of the reflection spectrum is rounded near the reflection peak, as seen in Figure 1 (a).  The effective grating length must also be kept relatively short due to the absorption associated with this passive region; this effective length should be limited to 200 μm or less.

The high-power spectrally-stable pulsed DBR laser diodes presented in this work were fabricated as described in [3], except that the gain lengths of these devices were 750 μm and careful attention was paid during the fabrication of the DBRs for these lasers to ensure the desired reflection spectrum.

The Photodigm DBR semiconductor lasers were mounted on C-Mounts and pulsed using an Avtech Electrosystems AVO-6D-B Laser Diode Pulser.  The lasers were driven at pulse widths ranging from 4 ns to 50 ns at a repetition frequency of 20 kHz, which is the driver’s maximum frequency.  The electrical pulses were not ideal due to a small amount of ringing present in the pulses as shown in Figure 2.  The laser under test was temperature controlled with a TEC driven by an ILX LDT-5910B Temperature Controller.

The laser light from the DBR laser was collimated with an aspheric lens and coupled into an unbalanced Michelson interferometer as shown in Figure 3; unbalanced meaning that the arm lengths are slightly different to provide a slight delay for light in one arm with respect to the other arm.  The delay allows for two different portions of the pulse to interfere with one another.  As the source wavelength changes, the intensity of the interference will change accordingly, thus providing a wavelength sensitive monitor.  The light at the interferometer output was coupled into a single mode HI-1060 optical fiber with FC/APC connectors and analyzed using an Agilent Infinium DCA 86100A Wide-Bandwidth Oscilloscope.  This oscilloscope is equipped with a 20 GHz optical/electrical 86105A module.  The oscilloscope was used in eye diagram mode to capture a very high number of pulses to get a statistical overview of the distribution of the laser modes.  An interferogram for a non-ideal device is shown in Figure 4 as an example.  This example illustrates both inconsistent mode selection from pulse to pulse, as well as a mode hop during the pulse. 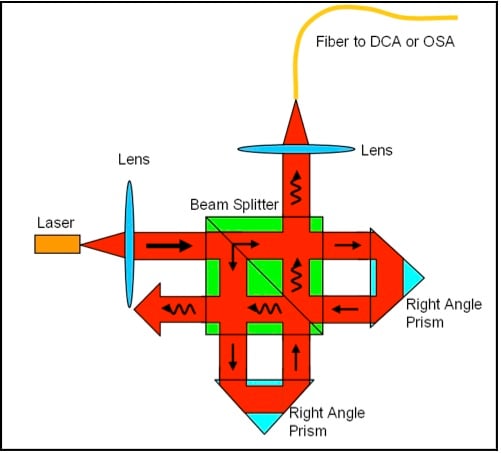 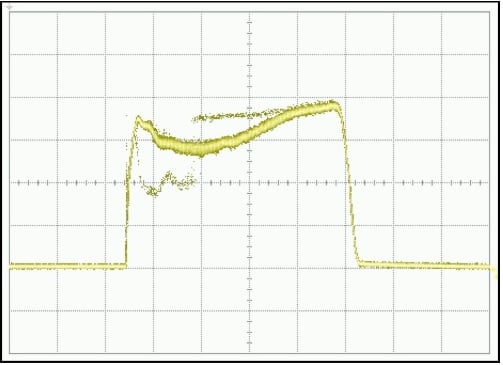 Figure 4. Non-ideal device showing a secondary mode being selected with a low probability; further, this secondary mode has a very apparent mode hop.

Figure 5 is the optical pulse measured with one arm of the interferometer blocked for a variety of pulse widths.  The roundedness near the rising and falling edges comes from the rise and fall times associated with the laser diode driver used.  The gain-switching spike on the rising edge of the pulse is inherent to semiconductor lasers; however, this spike can be virtually eliminated through pre-biasing the laser to just below threshold.  The ringing from the electrical pulse is very apparent in the optical pulses longer than 8 ns. 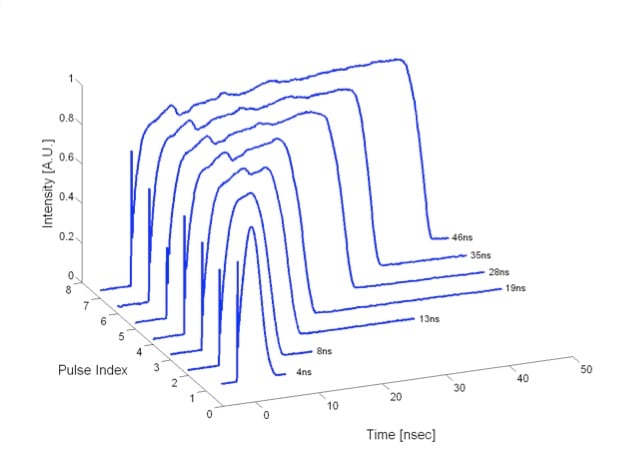 Fig. 5. Optical pulse traces through the unbalanced interferometer with one arm blocked with various pulse widths

The measurements presented here were taken from a typical Photodigm 976 nm DBR semiconductor laser with 750 μm gain length.  At a peak current level of 560 mA (~425 mW) and a 50ns pulse width the interferogram shows no sign of a secondary mode or any competition between modes for temperatures ranging from 15ºC to 60ºC; a few samples at different temperatures of the interferograms at this peak current level are shown in Figure 6.  In Figure 6, it is worth noting again that these interferograms are wavelength dependent traces; the amplitude of the interferogram has no absolute relation to the actual peak power of the pulse (i.e. the reduction in interferogram amplitude as temperature increases in this series is purely coincidental).  Figure 7 shows the spectrum as measured by the OSA for this device at 560 mA at 20ºC and 35ºC.  This device maintained excellent mode selection and spectral stability for peak drive currents ranging from threshold to 870 mA for the temperature range of 15ºC to 60ºC. 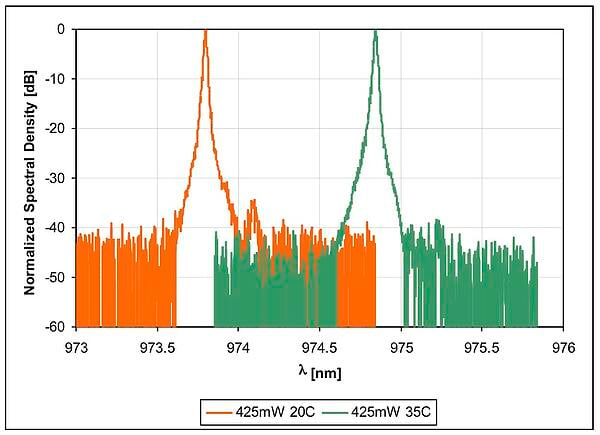 For this device, the pulse remains stable until near 880 mA for a 50 ns pulse at 20ºC (~660 mW) at which point the interferogram becomes irregular.  At this current, the optical pulse from a single arm of the interferometer is irregular, as seen in Figure 8.  Presently, it is unclear exactly what is causing this optical pulse breakdown at this high power level.  This optical pulse breakdown is some sort of induced modulation that is accompanied by significant spectral broadening, but the devices typically retain a single spectral mode as measured by an OSA.  The precise point at which this pulse breakdown phenomenon occurs is device dependent. 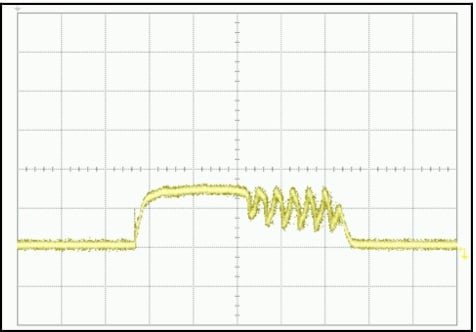 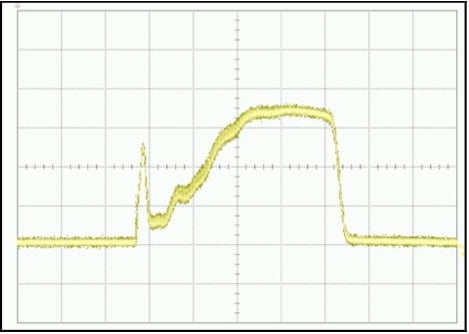 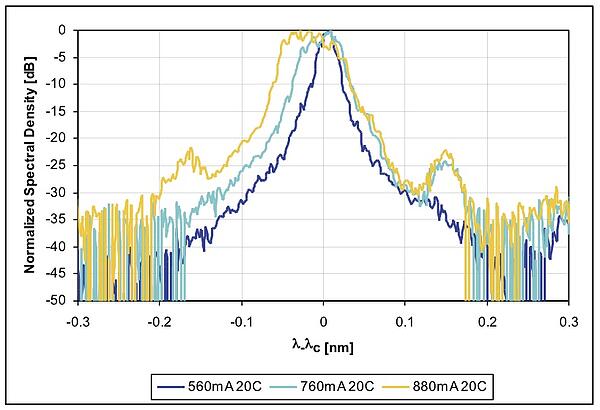 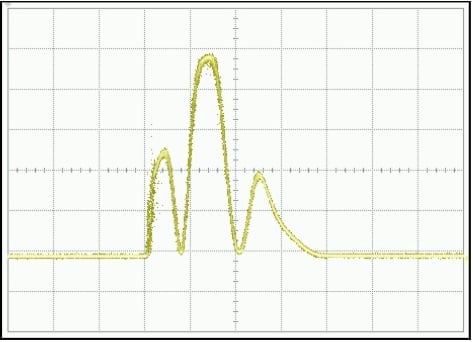 A noticeable trait of the interferogram in Figure 11, is that the there are two valleys in the trace.  These two valleys indicate that the wavelength is changing quite significantly during the pulse.  In order to gauge the chirp or broadening of the spectrum with peak current, the OSA spectrum was recorded for several peak current levels for the 976 nm DBR semiconductor laser under test.  The width of the optical spectrum was determined at full width half maximum from the OSA spectrum.  This width was reduced by the spectral width for CW operation (effectively subtracting away the point spread function of the OSA).  The chirp was then calculated based on this number.  The chirp values calculated by this method for a 50 ns pulse as a function of peak drive current are shown in Figure 12 (a); the slightly higher chirp value at lower currents comes from the Avtech laser driver.  The top of the pulse has a slope with a slight increase at low drive currents.

This measurement was also carried out for a fixed current and various pulse widths.  The chirp values resulting from these measurements are shown in Figure 12 (b).  The chirp for the 625 mA peak current versus pulse width shows a trend that is most likely explained by the slow rise and fall times of the laser diode driver for the shorter pulses.  Since the instantaneous frequency of the laser is varying over the entire pulse, the measured optical spectrum will be significantly broader.  As the pulse starts to have a flat top, the instantaneous frequency will have a more centralized distribution around the frequency corresponding to this steady state area.  However, as the pulse becomes longer the instantaneous frequency will begin to change during the flat top of the pulse due to heating effects at these high current levels and longer pulse widths.

The measurements presented here were taken from a typical Photodigm 1064 nm DBR semiconductor laser diode.  For this device, the pulse remains stable until just past 700 mA for a 20 ns pulse at 20ºC (~500 mW) at which point the interferogram becomes irregular.  At a peak current level of 700 mA (~500 mW) the interferogram shows no sign of a secondary mode or any competition between modes for temperatures ranging from 15ºC to 60ºC; a few samples at different temperatures of the interferograms at this peak current level are shown in Figure 13.  Figure 14 shows the spectrum as measured by the OSA for this device at 700 mA at 20ºC and 35ºC.  This device maintained excellent mode selection and spectral stability for peak drive currents ranging from threshold to 700 mA for the temperature range of 15ºC to 60ºC. 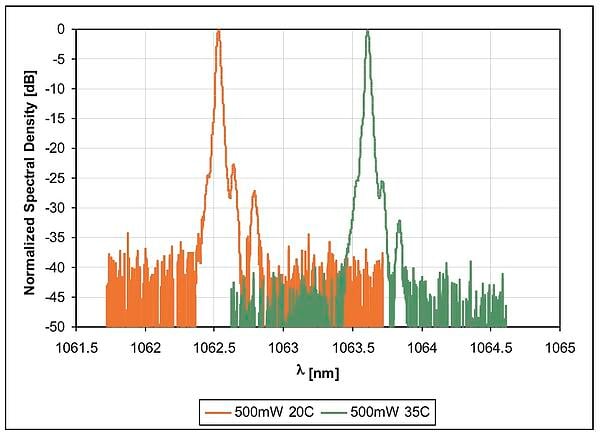 For shorter pulses, the maximum usable peak current was increased significantly.  For a 4 ns pulse, the peak usable current was extended to 850 mA or approximately 600 mW peak power.  An interferogram at 4 ns for 850 mA peak drive current is shown in Figure 15 (a), with the optical spectrum at the same operating conditions shown in Figure 15 (b).  Some devices have a little noise immediately following the gain switch peak, as seen in the interferogram in Figure 15 (a).  This noise is present in the optical pulse and stems from the process of the device finding equilibrium with the correct laser cavity mode after the gain switch peak.  This noise is present immediately following the gain switch peak and typically subsides in less than 400 ps.

The light-current characteristic curve was taken for this device under pulsed operations to see how the power output rolled off with drive current.  This curve, shown in Figure 16, was taken at a pulse width of 15 ns and a repetition rate of 10 kHz.  The slope efficiency begins to significantly rollover at a peak drive current of 800 mA, which is very near the operating currents at which the optical pulse breakdown occurs.