Deterministic wavelength tunability is a key advantage of monolithic DBR lasers. Applications requiring distributed Bragg reflector (DBR) lasers are becoming more and more demanding in terms of maximum peak power and wavelength agility. The narrow bandwidth of the DBR laser diode enables extremely high resolution scanning for atomic spectroscopy, Raman spectroscopy, and pumping specific transitions for such applications as diode pumped alkali lasers. Spectroscopic analysis requires a wavelength scan across the spectral feature to resolve it.  Furthermore, by repetitively scanning across the feature, an error signal can be generated that allows locking of the laser output to a specific transition.  This type of wavelength agility in laser diode tuning is not possible with competing technologies, such as hybridized volume Bragg grating lasers. Furthermore, the monolithic nature of the DBR laser diode offers versatility and robustness for tunable diode laser absorption spectroscopy (TDLAS) unmatched by any external cavity laser.

The wavelength tuning requirements of DBR lasers often vary from one application to another.  Therefore, proper understanding of the interplay between the DBR section and the gain section is a requirement to meet device specifications imposed by the different applications. DBR laser diode tuning is accomplished by either change of injection current into the gain section (DBR current tuning), or through change in temperature of the entire device by altering the heatsink temperature (DBR temperature tuning).  The change of the refractive index with temperature is the dominant tuning mechanism. DBR current tuning by changes in carrier density have smaller effects on the lasing wavelength. Physical elongation of the laser cavity with temperature also contributes to wavelength tuning, but is a much smaller effect than the other two effects.  DBR temperature tuning can be viewed as a coarse adjustment, and DBR current tuning is a fine adjustment.

Figure 1 shows the cross-sectional view of a simplified DBR laser structure.  The structure consists of a gain section of length Lg and a passive DBR section of length LDBR.  When current is injected into the laser structure, the gain section will experience an increase in temperature, which is proportional to the dissipated power Pdiss and the thermal resistance RT between the junction and the heat sink.  For simplicity we will assume that the heat flow is primarily in the vertical direction and the temperature of the DBR grating section is equal to the heatsink temperature and is unaffected by the injected current itself.  In practice a very small temperature increase in the DBR section, especially at higher injection currents is observed.

An increase in temperature of the gain section will alter the refractive index of each epitaxial layer and therefore will shift the cavity modes towards longer wavelengths.  The wavelength shift as a function of injection current can be expressed as:

Temperature variations can be estimated from the dissipated electrical power and the thermal resistance:

Neglecting the thermal expansion of the gain section and the small thermally induced variation of the carrier density above threshold (further diminished by the confinement factor) the current induced wavelength change is given by:

The mode-hop-free current range Im is defined as the minimum required current change necessary to shift the wavelength equal to the amount of a mode spacing dl determined by the effective cavity length, i.e.

where Lg is the gain section length and LDBR,eff is the effective DBR length determined by the physical length of the DBR grating and the coupling strength [5].

Furthermore, according to Eqn. (3) the wavelength change is linear in injection current, which again can be seen in Fig. 2 at different temperatures.  Figure 2 shows that for a fixed temperature the DBR laser emits in a single spectral mode with several wavelength discontinuities, with the distance between them decreasing with increasing injection current.  These wavelength discontinuities, known as mode hops, are associated with an abrupt wavelength change, which correspond to the value for the longitudinal mode spacing. In general, the mode closest to the DBR peak reflectivity has the lowest modal loss and hence becomes the lasing mode.  As the injection current and therefore the temperature increases, the modes shift to longer wavelengths, but at a much faster rate than the reflectivity spectrum.  As the lasing mode moves away from the DBR peak reflectivity, there comes a point where the adjacent mode has a higher reflectivity.  At this point the wavelength suddenly changes to a different mode, resulting in a decrease of the emission wavelength. This is called a mode hop, and it is the mechanism by which the DBR laser stays within its operating wavelength range.

Changing the heatsink temperature will not only shift the cavity modes, but will also shift the reflectivity curve of the DBR.  The wavelength shifts in the two regions are equal if both sections experience the same temperature change.  However, the increase in temperature reduces the optical efficiency and leads to an additional heating in the gain section.  Taking this additional heating effect into account leads to the following expression for the thermal wavelength shift 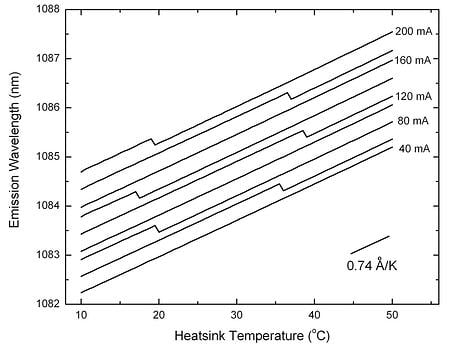 Figure 3. Emission wavelength against heatsink temperature at different injection currents.  The individual curves are offset for clarity by 0.3 nm in the vertical direction.

Fig. 3 demonstrates that the second term in parenthesis on the right hand side in Eqn. (6) is indeed small and to a first-order may be neglected.  The wavelength shift with temperature is almost independent of the injection current and amounts to 0.074 nm/K.  By establishing a similar definition as for the mode-hop-free current range, the mode-hop-free temperature range becomes

which will be used in the following section to determine the thermal resistance of two DBR lasers with different gain section lengths. In Eqn. (9), we assume

which can be immediately justified by looking at the temperature tuning ranges in Fig. 3.

In general, the change in the dissipated power is much larger with current than with temperature, i.e. (in units of Ampere and Kelvin), which leads to a larger mode-hop-free tuning range by changing the temperature than by changing the injection current.  For typical test devices in this work, we measured DIm @ 0.05 A and DTm @ 75°K, which results in a ratio of 1 : 1500.  Note the exact values may vary with the specific operation conditions. 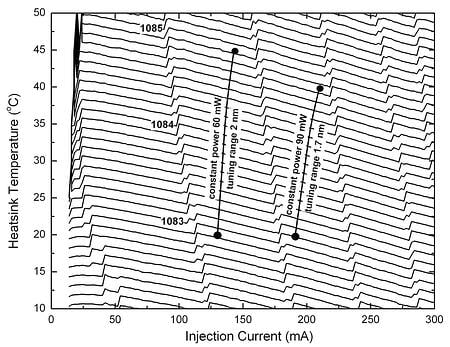 To conclude, we have demonstrated the mechanism of wavelength tuning in DBR laser diodes.  We distinguished between a thermal and a current tuning mechanism.  The thermal tuning is constant and amounts to 0.074 nm/K and is independent on the gain section length and operating optical power.  In general, mode hop free tuning can easily be achieved over several tens of degrees.  In contrast, current tuning is associated with repeated mode jumps separated in wavelength by the mode spacing, whereas the latter is determined by the gain section length and the effective length of the DBR grating.  Between mode jumps the wavelength shifts quasi linearly with an average amount ranging between 1.2 nm/A and 5.2 nm/A, depending on the operation conditions and gain section length.