These five regimes are mapped depending on the first two factors, as show in Figure 1.  In Figure 1, the ratio of optical feedback power to emitted power is shown in dB and the distance to the feedback reflector is shown in cm.

Figure 1.  Regimes of operation of semiconductor lasers according to ratio of feedback power to emitted power and distance to feedback reflection.  Figure 1 is adapted from Reference 3.

These five regimes are described as follows:

Regime 1:  Lowest level of feedback.  Broadening or narrowing of the laser linewidth occurs based on the distance to the reflector, which determines the phase of the feedback signal.

Regime 3:  This very narrow regime from feedback levels of -39 dB to -45 dB causes the linewidth to narrow.  In this regime, the laser operates on a single line and length of the reflector and the feedback phase are inconsequential. Feedback reflections of greater magnitude can still cause problems.

Regime 4:  In this regime, the laser spectrum develops side modes separated by the main mode by the relaxation oscillation frequency.  As feedback increases, the laser enters "coherence collapse." In coherence collapse, the laser line broadens to several 10's of GHz with several peaks as shown in Figure 2.  The laser is insensitive to changes in feedback phase.

Regime 5.  This regime typically requires an anti-reflection coating on the laser output facet.  In this regime the laser is a short active section in a long cavity laser. The back facet of the laser and the feedback reflector serve as cavity mirrors.  With sufficient wavelength selectivity, the laser operates on a single longitudinal mode with a narrow linewidth for all phases of feedback. 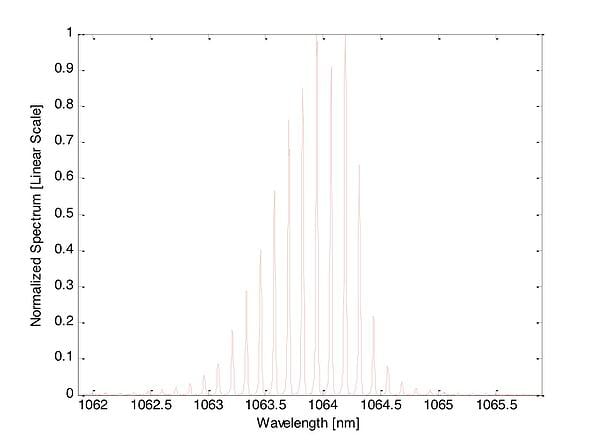 The requirements of the application determine what is acceptable in terms of the level of feedback present.  In many applications, it would be preferable to always operate a diode laser in Regime 3.  However, it is difficult to force a reflection with this narrow window of feedback power.  For example, a 100 mW output would require a feedback power from 12.6 to 31.6 microwatts. Since this type of control would be difficult to attain, the requirements of the application must be carefully considered.

An example application for minimal stability requirements would be staying with the passband of a  multilayer transmission filter with a bandwidth of a few nanometers.  In such an application, a Photodigm DBR laser could be operated in any of the five feedback regimes comfortably. Any laser package can accommodate such minimal requirements with adequate temperature control.

An example application for moderate stabilty requirements would be staying with the acceptance bandwidth of a second harmonic generation crystal.  This typically requires the laser to stay within a window with a bandwidth of less than 0.2 nm.  In such an application, a Photodigm DBR laser could be operated in Regime 1, Regime 2, or Regime 3.  Any laser package can accommodate the moderate stability requirements given adequate temperature control.

An example application for high stability requirements would be exciting the natural absorption bands of alkali vapors, such as rubidium or cesium.  This type of application requires the laser to stay within a window with a bandwidth of approximately 1.5 picometers, or 0.4 GHz.  In this type of application a Photodigm DBR laser could be operated in Regime 1, Regime 2, or Regime 3.  Again any laser package can accommodate these high stability requirements given adequate temperature control.

For extremely high stability requirements, such as resolving the hyperfine structure of the absorption bands of alkali vapors, the laser must be able to continuously tune over wavelength. In such an application, the laser cannot operate in Regime 2.  The laser will hop between external cavity modes which can be separated by 10's of MHz.  In applications requiring such extreme control, a Photodigm DBR laser can be operated in Regimes 1 or 3.  As seen in Figure 1, operating in Regime 1 requires a very low feedback reflection.  This can be accomplished with a laser diode on C-mount or in a TO-8, an appropriately coated short focal length lens, and a free space isolator.  Further, reflections from after the isolator should be minimized in order to ensure Regime 1 operation.

Butterfly packaged devices are not recommended for such extremely high stability requirements.  The reason being that the fiber guides any feedback reflection with the fiber portion of the setup directly back to the laser. FC/APC connectors provide a feedback reflection of approximately -55 dB, and fiberized isolators have similar return losses.  The feedback levels will send the laser into Regime 2 operation where as previously stated the laser will hop between external cavity modes.  Telecommunications lasers have isolators built in to the butterfly package, but these small isolators have power handling capabilities of approximately 100 m@ only. A butterfly packaged device may be used if an intentional feedback is provided that will force the laser to operate in Regime 3. This type of operation is difficult to maintain.  It may also be possible to increase the distance to the first feedback reflection in order to decrease the external cavity mode spacing to a few MHz.