The Opportunity in DBR Lasers

Laser devices are an enabling technology component of a complex system.  Buried deep inside complex industrial and scientific instruments, the laser device itself and the business of the laser manufacturer are often misinterpreted, particularly when novel laser gain media are involved. The stakes are high in the fight to gain a position in the supply chain, and technical superiority does not guarantee a place within that chain.

These are exciting predictions.  Furthermore, the 2016 Seminar identified the following areas of application where laser suppliers could find new or growing markets:

While each area may have potential for laser absorption, the more critical question for the device supplier is whether the market offers an attractive proprietary opportunity, or whether the opportunity is that of a commodity.  Furthermore, each area should be screened according to the following criterion:  “What are the unique characteristics that will drive the adoption of a specific laser modality to the exclusion of other, lower cost alternatives?”  That is indeed a very high bar.  If the bar cannot be hurdled, then the device supplier is relegated to being a commodity supplier.

Lasers clearly have surpassed this bar in some fields, including telecommunications, cutting and welding, specific medical specialties such as ophthalmology, optical data storage, and laser guided munitions.  While we can discuss such technical matters as modes, line widths, M2, and so on, the value proposition rests on the following characteristics:

Photodigm has pioneered the monolithic semiconductor distributed Bragg reflector (DBR) laser to enable its competitive adoption in multiple areas through the following characteristics:

Having demonstrated these characteristics , Photodigm DBR lasers are being applied to both emerging and established fields such as cold atom physics, magnetometry, navigation, timing, spectroscopy, seeding, low noise optical pumping, and metrology.  They are being employed in research and development where they displace Ti:Sapphire lasers and external cavity lasers at 1/1000 or less of the volume and half to  1/100 of the cost. These development programs can then realistically have a pathway to fieldable OEM applications.  At the same time, as semiconductors, they follow the favorable semiconductor cost curve characterized by high fixed costs and vanishing marginal costs.

Photodigm DBR lasers:  “The Laser is the Instrument.” 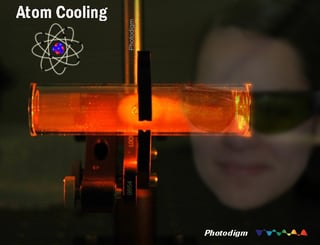 * Held annually on the Monday of Photonics West week, and sponsored by Pennwell.